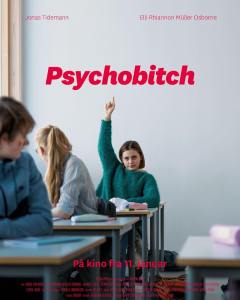 Psychobitch: teenagers are teenagers everywhere, so while Martin Lund’s drama has a lot that is instantly recognizable, it also offers a bit of local colour that distinguishes it from the usual, as it’s set in a small Norwegian town. More relevantly, the film portrays its young characters as realistic pools of insecurity that manifest in different forms. Even the title character is neither of those things, just a young woman who likes to dance to her own music, sweetly played by Elli Rhiannon Müller Osborne. Jonas Tidemann plays the all-around good guy that gets entangled with her also sweetly, but with a hint of lack of range. The film’s look, both editing (by Christoffer Heie) and cinematography (by Adam Wallensten), are very clean and functional.