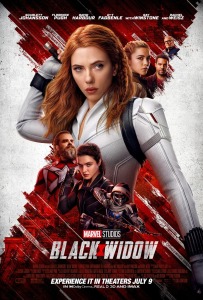 Black Widow: Cate Shortland’s entry to the Marvel Cinematic Universe falls in a trap that was set up by the own construct of the MCU: much like most of the over twenty films that preceded it, this is not allowed to exist on its own terms, but always as a piece of the whole. The plot, in general terms, follows a tired but efficient trope of a number of action films; it is, however, bookended by insistent reminders of other films. Its untimeliness (this should have been made four or five years before it was) makes it all more confusing and less emotionally effective. The dynamics of the faux-family are where most of the interest is, in any case, and most of that comes from the cast: Scarlett Johansson played the title character for over a decade, so it is a known quantity; Florence Pugh, as the likely new kid on the block, is quite a find; David Harbour is a riot; Rachel Weisz is quite good as well. The action works well when the scale is small, and not that well as it becomes larger and larger. Neither the main villain nor the main henchman is particularly memorable. Visually and aurally, the film is polished but eminently forgettable.