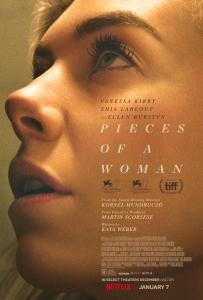 Pieces of a Woman: this drama, by Kornél Mundruczó and Kata Wéber (that’s how it’s styled; it was directed by the former and written by the latter), lifts off with a devastating start. It’s hard to sustain that level of energy going forward, but the film, nevertheless, continues its touching chronicle of a couple drifting apart with effectiveness, albeit also with some degree of coldness. The casting is solid: Shia LaBeouf is a fine choice to play the blue-collar husband and he is in good shape; but the film belongs to Vanessa Kirby, playing the patrician wife. She is broken by what happened to her, but that’s only noticeable looking at her actions since her demeanor suggests someone in control; the acting strikes that fine balance between having and not having control. Ellen Burstyn is quite good as her commanding mother. Cinematographer Benjamin Loeb’s work is quite interesting; he pulls off some elegant and impressive long takes (which showcase the acting and blocking more than themselves), as well as some intriguing framings. Editor Dávid Jancsó gives the film an unhurried pace and adds a visual motif that may be confusing at first, but that turns out to be ellucidating.