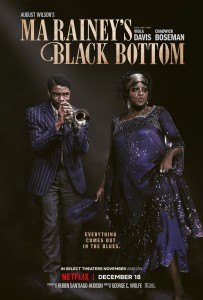 Ma Rainey’s Black Bottom: George C. Wolfe’s drama has a simple situation as the starting point and is (mostly) limited to a small number of locations, but that in no way reduces its energy. The dialogues, out of August Wilson’s play, are heavily charged and the acting of the two principals is ferocious. The story masks itself as a tale of a recording session, but it’s truly about power relations. Viola Davis, as the imperious star singer who has everything going against her but still holds on to her power, is great as she projects all the hurt and anger, in a performance that is very physically precise as well. She is nevertheless upstaged by Chadwick Boseman, who plays the talented and purposeful trumpeter; his performance is emotional, vulnerable, expressive. It’s quite a powerful one-two from the top, but the supporting players are also solid (in particular Colman Domingo and Glynn Turman as two of the band members, while Taylour Paige creates a sexually-charged character). Director of photography Tobias A. Schliessler and editor Andrew Mondshein keep things cinematic and dynamic. The film has good visuals, particularly Ann Roth’s costumes. The music, both the old Ma Rainey’s classics and Branford Marsalis’ new score, is high quality, feet-stomping.