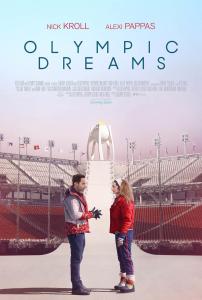 Olympic Dreams: Jeremy Teicher hits the sweet spot in this small romantic drama; it’s hard to imagine a time and place that best symbolizes people lost at crossroads than the Olympic Village, which exists for a few weeks every 4 years. The two protagonists are lost, confused, socially awkward, and, more relevantly, extremely engaging. Acting can be a bit loose and flat here and there, due to the non-professional nature of most of the supporting cast. Alexi Pappas is merely OK as the Olympian; it is an interesting character, a world-class athlete that is not, however, a star, a description that fits most Olympians but is generally overlooked. Nick Kroll is better as the clingy dentist, a man desperate for any kind of human touch. Their relationship is believable and touching. The film has a simple but effective look; considering that the crew consisted only of Teicher tripling up as director, cinematographer, and sound recordist, as well as the level of access they had in the 2018 Winter Olympic Games in PyeongChang, it is an impressive feat. Composers Annie Hart and Jay Wadley’s musical score is a good fit.