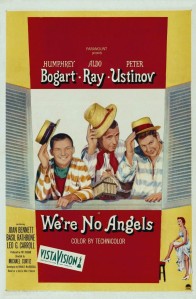 We’re No Angels: this entertaining comedy by Michael Curtiz runs with the idea that virtues and vices can be found everywhere, even where they are least expected. The three protagonists are far from being good men, have no shame in saying so, but are still capable of helping the needy; they are blunt instruments of good. That makes them interesting characters to watch, because, on top of it all, they are unpredictable. At the other end of the spectrum, the villains are the most respectable and deplorable people around. It helps that everyone is played so well: Humphrey Bogart (hard-nosed with comedy), Peter Ustinov (smooth with a hint of sinister), Aldo Ray (charming but very rough-edged) as the protagonists; Leo G. Carroll (absent-minded father), Joan Bennett (beautiful and strong mother), Gloria Talbott (lovely daughter) as the family; Basil Rathbone as the imperious, arrogant owner. The art direction of Roland Anderson and Hal Pereira and the costumes of Mary Grant are colorful and lively, beautifully captured by the elegant work of director of photography Loyal Griggs.