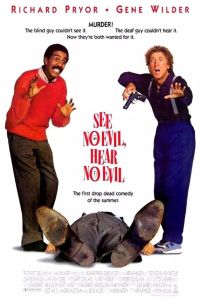 See No Evil, Hear No Evil: the preposterous concept of Arthur Hiller’s comedy gives ample space for a number of gags; some of them work, some of them don’t, but the film can be extremely funny at times, The characters are clearly exaggerated, but they are distinctive in how they face and deal with their respective disabilities. Much of that comes from the acting: Richard Pryor, wide-eyed, is abrasive, defiant; Gene Wilder is soft-spoken, unassuming. Their interaction is great. Joan Severance, as the most memorable of the villains, has seemingly infinite legs but is a bit stiff in her acting. Aesthetically, the film is non-descript, capturing New York City and surroundings in unmemorable ways.