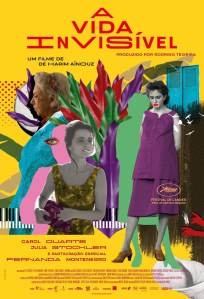 Invisible Life: the story told by Karim Aïnouz’s drama, of a broken sisterly relationship by prejudice and by strict patriarchy, of lost dreams and of the cruel passage of time is, on paper, really sad. But the low-key performances, the slow ramp-up of emotions, the lack of character depth, all make the double journeys that much harder to relate to. For the most part, the performances range from the indifferent (Carol Duarte and Julia Stockler look alike enough to be feasible sisters, but their acting is merely appropriate) to the annoying (Gregório Duvivier); the exception is Fernanda Montenegro, who in her very short participation is able to transmit all the devastating pain her character went through the years. The film recreates its time and place nicely, through the costumes of Marina Franco and the production design of Rodrigo Martirena. Cinematographer Hélène Louvart captures it well, giving the film its lively tropical colours.