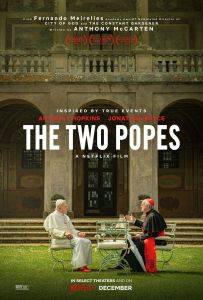 The Two Popes: centered around two great performers playing off each other at the apex of their powers, Fernando Meirelles’ film is entertaining and elucidative, no matter how speculative it may also turn out to be (the public part of the story is well-known, but the private side is likely fictional; that, of course, is neither here nor there, as this is not a documentary). The dialogue (the film was written by Anthony McCarten) balances a nice sense of humour in the conversation about faith and the paths of the Catholic Church, while also slowly revealing more about the two characters. That last bit is crucial, as ultimately the film is about the two men understanding and accepting each other, in spite of their apparently irreconcilable differences. Jonathan Pryce (who happens to be a dead ringer to his character) and Anthony Hopkins act and react beautifully off each other, building up their characters beyond their public images. If the film suffers a bit when the pair is not onscreen, it’s not the fault of Juan Minujín, who plays well the younger version of Pryce. For a film where the dialogue is so important, Meirelles avoids the sense of filmed theater with the support of cinematographer César Charlone and editor Fernando Stutz; their work brings some sense of urgency to the dialogue, but also the idea it is not to be taken literally, that the conversations happened exactly like this.