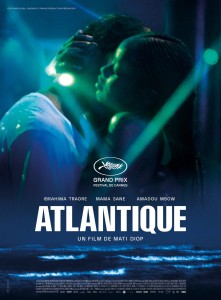 Atlantics: even thought the central issues of Mati Diop’s drama are clearly realistic (the relationship between gender politics and religion, arranged marriages, the exploitation of workers by large companies), the way that story is told, with the use of magical realism, is what sets this film apart. It doesn’t completely work, but it is nevertheless a very poetical choice. The protagonist is played by Mame Sane, who has big expressive eyes and looks the part, but her performance is simply good, not memorable. The rest of the cast is equally competent but unspectacular. The film has an eerie quality to it, starting with composer Fatima Al Qadiri’s musical score and cinematographer Claire Mathon’s images. The pace imprinted by editor Aël Dallier Vega, however, leaves a bit to be desired, as the film lags here and there.