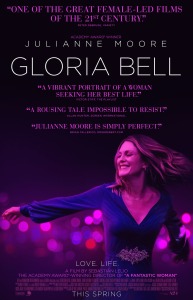 Gloria Bell: it is a laudable journey she sets to do, but the eponymous character in Sebastián Lelio’s drama is such an empty shell that it is truly hard to care too much. To the film’s credit, the story doesn’t spiral into predictable melodrama, but goes to far in the other direction. That is not to say, however, that the performance given by Julianne Moore is not top-notch: her acting has great emotional range, and she deals with all the phases of her character beautifully. She has good chemistry, for a while, with John Turturro, who gives an overall good performance; most everyone else is too buried in the background to leave much of an impression. The cinematography of Natasha Braier solid and colorful. The film also present a decent collection of songs.