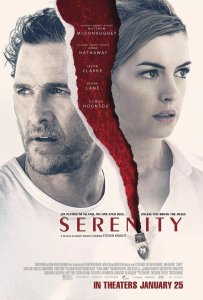 Serenity: there is a jarring disconnect between the story that Steven Knight sets up to tell and the whole (setting, concept, message etc) this modern noir of sorts turns out to be; the ill-conceived timing of the big reveals just manages to sever any possible emotional connection with the situation and characters at hand. The film tries to be too smart and too original for its own good, and ultimately fails. The cast, to their credit, is game to whatever it is going on: Matthew McConaughey (whose presence is justified in large part for his buff physique, generously displayed) is fine in his despair and obsession; Anne Hathaway (who rocks a Veronica Lake-like hairdo, but the character implications of that choice are squandered) is seductive and pained; Diane Lane is another welcome presence, even if her character serves no purpose whatsoever to the plot, ideas or character building; Jason Clarke makes a good heavy. Cinematographer Jess Hall makes good use of the beautiful locations.