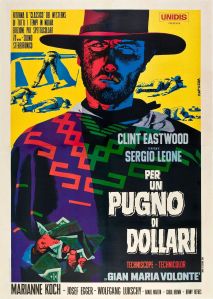 A Fistful of Dollars: refreshingly amoral, Sergio Leone’s Western presents a hero that is barely any different from the foes he is fighting (or, as the case may be, throwing them at each other’s throats), in opposition of the usually clear-cut white versus black hat. It is a violent story, in a violent world, so there is some amount of graphical violence, but it’s mild for today. The protagonist’s actions are unpredictable, so the film is more interesting because of it. The aesthetics follow the same idea: costumes are dirty and worn out, lived in, therefore more realistic. It’s beautifully shot by Massimo Dallamano, in a very operatic style, going to extremes both in extreme close-ups and ultra-wide crane shots. The editors make great use of that, with the juxtaposition of such shots (accompanied by Ennio Morricone’s memorable musical score) manufacturing moments of incredible tension. Clint Eastwood creates the quintessential silent anti-hero; it’s barely ever possible to see what’s on his mind, and that quietness is, in this case, a boon. The rest of the cast goes the other way, with larger-than-life performances.