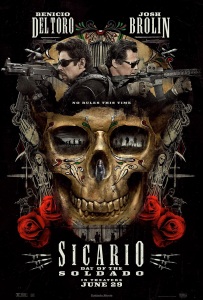 Sicario: Day of the Soldado: this extraneous sequel, directed by Stefano Sollima, retains all the unpleasantness of the original film and drops the elements that worked. Every character in the film is, at best, amoral; to compound, their agendas make no sense at the start, and even less when any sort of crossroad is reached. Any tension the film might have is therefore killed, as the characters’ fates are inconsequential; additionally, the story evolves in a very confusing, murky way (even time passage doesn’t really compute at times). The main performers are fine: Benicio Del Toro is, for better or worse, less of a puzzle (how unconvincing it is falls at the feet of the writing, not performance); Josh Brolin is convincing as the smart-ass operative; Isabela Moner (backhanded compliment incoming) is not as annoying as she could be. Dariusz Wolski’s cinematography is utilitarian but unremarkable.