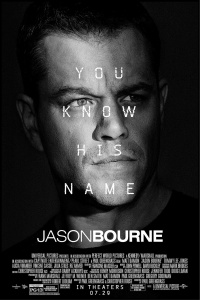 Jason Bourne: Paul Greengrass comes out with another ultra-kinetic action film; but the globetrotting plot is (yet another) rehash of other storylines in the series, one or two details aside, and it is, frankly, irrelevant. The action sequences, the real reason one would watch this, are shot (by Barry Ackroyd) and edited (by Christopher Rouse) in such a way that the events and the geography become virtually incomprehensible and a bit sickening (none of which comes as a big surprise). It’s a fine cast, both the old (Matt Damon has this role down pat by now) and new faces, but other than look grim and run, they are not asked to do much, alas.