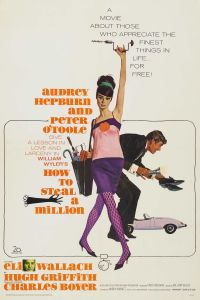 How to Steal a Million: it is sometimes said that “they don’t make films like this one anymore”; such nostalgia implies that the subject at hand has wit, class, naïveté unmatched in the present. This film is one that may inspire such comments. It’s light, charming entertainment; has a lovely cast (Peter O’Toole and  Audrey Hepburn displaying great chemistry) reading sparkling dialogue with aplomb, all under the solid hand of William Wyler. It’s perhaps too light, almost inconsequential, if that’s a problem.

(Incidentally, they didn’t make films like some that are done nowadays either. The language evolves, and produces films that are good and bad at any given moment or style. Watch them all, diversity is a great thing.)