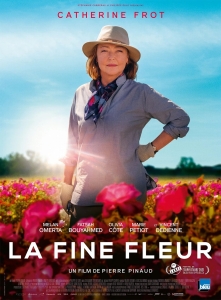 The Rose Maker: Pierre Pinaud’s relaxed, easy-going film follows the attempts of a nearly broke rose maker to stay relevant. The protagonist starts as single-minded and making somewhat morally dubious decisions, but the film eventually becomes about happy accidents and the importance of nurturing both flowers and people. The end result is breezy but very humane, nevertheless. Catherine Frot balances the single-mindedness of the protagonist with her innate goodness; the character is, however, a bit superficial. Melan Omerta plays the initially tough but talented helper efficiently. Olivia Côte, Marie Petiot, and Fatsah Bouyahmed round up the cast as mostly comic relief. Director of photography Guillaume Deffontaines captures the charming locations, in particular the beautiful flowers, with warmth and lots of colour. Very good (if ultimately obvious) use of music, both the songs that book-end the film during credits and the original score composed by Mathieu Lamboley.