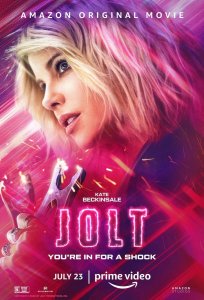 Jolt: Tanya Wexler merrily embraces the trashiness of the project: the story, essentially a revenge tale, is as bare as they come, and the characters, as paper-thin as possible. The cast raises it (slightly) above the material, however. Kate Beckinsale gives some dimension to the protagonist, avoiding the simplistic idea of an angry machine as she imbues some vulnerability and sensibility to the character. Laverne Cox is a riot as the straight-arrow and fierce cop. Stanley Tucci and Bobby Cannavale are both nice and sympathetic in their roles. The action is small-scale, quick, and intense. The most interesting aspect of the film is the production design, by Russell De Rozario, who created a number of very interesting and distinctive environments.