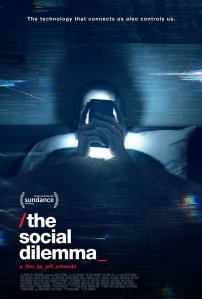 The Social Dilemma: there is no denying the relevance of Jeff Orlowski’s documentary. The design for an addictive system would be, in itself, bad enough, but the spread of a cesspool of misinformation that it begets as a side-effect is a serious issue, as quite a few recent events have clearly demonstrated. The interviewees are knowledgeable and, for the most part, in a position to tell that story with the level of detail they did. The director, however, seems to think that the subject is too dry and decided to use dramatization to emphasize what was being said; those scenes are heavy-handed, repetitive, and badly acted. They generally kill the pace of the film while adding no benefits to the conversation. That is the one misstep in Davis Coombe’s editing, which navigates well through the talking-heads. The concept that was chosen to portray artificial intelligence, however, is interesting.