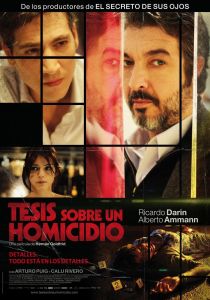 Thesis on a Homicide: Hernán Goldfrid’s mystery drama is a slow-burn affair; the film is ponderous but it gives space for some stirring considerations about justice, law, and morality. It is the story of an obsession and how it slowly makes a man unravel, and that’s more relevant than merely finding who the culprit is. The central performance is crucial (well, when isn’t it?), and Ricardo Darín delivers. He projects the obvious intelligence of the man and then deconstructs it as the obsession lands. Alberto Ammann, by nature of his character, gives a colder performance as the perceived antagonist. The film very efficiently builds its uneasy mood, making good use of composer Sergio Moure’s musical score and particularly the work of cinematographer Rodrigo Pulpeiro. The camera is restless and the framing, precise.