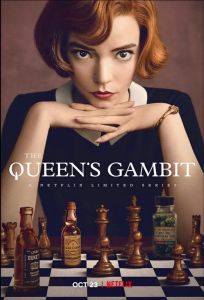 The Queen’s Gambit: the series created by Scott Frank and Allan Scott (based on a book by Walter Tevis, with all episodes directed by S. Frank) didn’t have to be about chess. It tells the story of a very interesting character, a determined and supremely talented young woman who nevertheless is flawed and filled with inner ghosts to fight. Her talent could be anything, but chess was a good choice, as its rigorous structure and demanding nature are known to drive people mad, as well as a competitive and sexist environment. Anya Taylor-Joy is a great choice to play the main role, and she gives a fine performance: her large, expressive eyes, elongated limbs, and unusual beauty allow the character to get her alluring nature, and she pulls off the large array of emotions and behaviors called for. Marielle Heller, as the adoptive mother, and Bill Camp, as the father figure, give solid (but short) supporting performances. The series has impeccable costume design (by Gabriele Binder) and production design (by Uli Hanisch), all captured by the elegant camerawork of cinematographer Steven Meizler, who keeps the camera moving very precisely and mechanically (except when it’s not, for reasons that make sense thematically). Nice use of music.