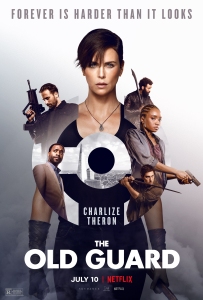 The Old Guard: there is nothing particularly fresh about a group of super-beings fighting injustice, even if in Gina Prince-Bythewood’s action film they have a somewhat different nature. Likewise, the action sequences are not particularly original, well-executed, or exciting (in part, because of the nature of the group of heroes, for the lack of a better word). On the other hand, the film has plenty of quiet moments spread between the action where some glimpse of the characters (mostly as a group, in some cases as individuals) is allowed to appear. It is a good cast: Charlize Theron plays the icy killing machine quite effectively, including the physical side of the action; KiKi Layne is appropriate as the new kid on the block; Chiwetel Ejiofor is solid as the sympathetic antagonist. The film is polished as a whole, and its location variety is welcome, but nothing about it is particularly remarkable.