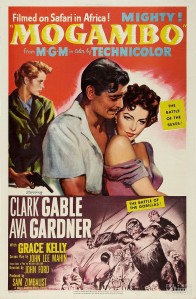 Mogambo: solemn, awkward romance that fails to justify solidly why the characters are falling in love; by the other hand, as an adventure this is a fairly minor one. The exception is Ava Gardner’s character, well-constructed and well-acted. John Ford was out of his métier in many ways (most relevantly, perhaps, by having a female character as the central piece of the story, as well as not dealing with Americana); nevertheless, one has to appreciate that he took the risk. While not in Monument Valley, he was able to get great images out of the African landscape.

Hatari! is a similar film in many ways.