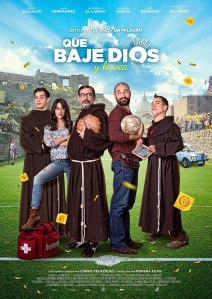 Holy Goalie: while the story of Curro Velázquez’s comedy, which portrays the fight of a group of monks to save the monastery they call home, is entertaining and inspiring enough, the humour that permeates the film mostly misses the spot. The concept may be silly, but it opens up for a modicum of discussion about how the Church interacts with the world. Acting, in general, is what is to be expected for the genre: Alain Hernández and Joel Bosqued play it straight, while Karra Elejalde and El Langui get more comedic; Macarena García is charming enough as a romantic interest. The film makes good use of its locations, both the Spanish monastery and the scenes around Rome, as cinematographer Unax Mendia captures them with maximum beauty in mind.