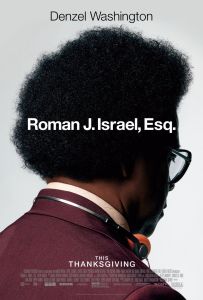 Roman J. Israel, Esq.: while Dan Gilroy has some interesting things to say about the American justice system in this legal drama, that doesn’t mesh very well with the plot; it feels relevant as a discussion but inorganic to the film. The title character is more interesting than the story itself, among other reasons because his journey is not fully convincing. Denzel Washington has his work cut out for him, as the character is a bit showy and unpleasant, and he makes the best use of the opportunity giving a very fine and convincing performance. Colin Farrell has less to do, playing decently a stiff, unmemorable character. Carmen Ejogo is a nice, but under-used, presence. The film is well-captured by the lenses of cinematographer Robert Elswit.