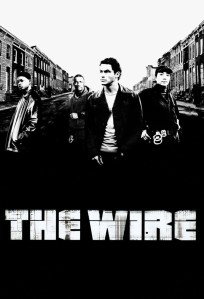 The Wire: every once in a while, something comes up that forbids one to be coy about it; in that spirit, there are few television shows that are as good as The Wire, and none better.

Writing is superb; in a broad sense, the series touches many issues during the different seasons that feel relevant; furthermore, it does so within the storylines, in a way that is easy to relate to since they are so organic. The pace of the whole series is ponderous, rewarding patience over cheap, artificial thrills. Most characters are interesting, complex and easy to care about (either in a positive way or in a negative way); the exceptions, for the most part, were introduced late and had no time to develop as well as the elder ones.

Dialogue is realistic-sounding, and read exceptionally well by the gigantic, great cast. It’s hard to find any acting that is not top-notch, and harder still to come up with one or two standouts (it would be unfair to name just a few out of the tens of great actors); this series is the best possible definition of an ensemble.

All seasons are engaging; if the last one is a tad outlandish and excessively neat in its “endless cycle” overtones, it must be excused for, once, choosing poetic liberties to make a point that, specifics be damned, is valid.