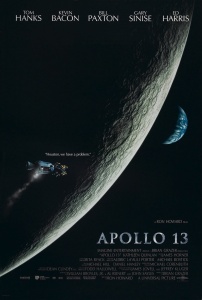 Apollo 13: it’s a good story that Ron Howard has in his hands, and its telling is effective but a bit conventional. The film is reasonably generous with technical aspects and lingo, without resembling a documentary or feeling too expository. Characterization is somewhat shallow, and there’s a glut of supporting characters that fail to be distinctive in any way (other that being very smart and dedicated to the mission). Acting is solid; much like the film, effective and without undue showboating. Tom Hanks has this sort of character, level-headed and smart in the face of peril, down pat; all the other big names deserve mention: Kathleen Quinlan, Kevin Bacon, Ed Harris, Bill Paxton, and Gary Sinise are not marvelous but fine enough. Technically, the film is well-done: cinematographer Dean Cundey moves the camera around and find some interesting frames in tight spaces, but the film is too bright; the editing duo keeps the film moving at a nice pace; very good sound design, as well.